Skip to Main Content
Due to recent disruptions to deliveries, we have temporarily suspended the Royal Mail service. Please choose either DHL or Courier service at checkout
CALL US +44 2476 717 100 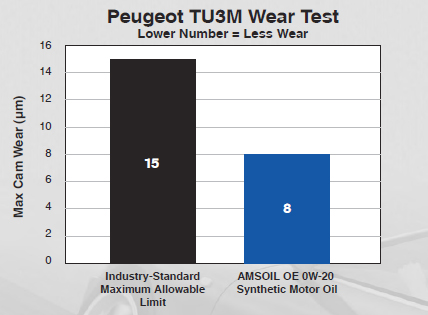 Protects Pistons from Low-Speed Pre-Ignition
OE Synthetic Engine Oil features unique chemistry proven to protect your engine against the harmful effects of low-speed pre-ignition (LSPI). LSPI is the spontaneous ignition of the fuel/air mixture prior to spark-triggered ignition. Most new engines feature gasoline direct injection (GDI), often coupled with a turbocharger. These technologies heighten the possibility of LSPI events, which can destroy pistons and connecting rods. A properly formulated engine oil is critical for protecting your engine against LSPI.

1Based on independent testing of OE 0W-20 in the Peugeot TU3M Wear Test as required by the dexos1 Gen 2 specification.

*All trademarked names are the property of their respective owners and may be registered marks in some countries. No affiliation or endorsement claim, express or implied, is made by their use.

APPLICATIONS
Use AMSOIL OE Synthetic Engine Oil in applications that require any of the following specifications:

COMPATIBILITY
AMSOIL OE Synthetic Engine Oil is compatible with other synthetic and conventional engine oils. Adding other oils, however, will shorten the life expectancy of AMSOIL engine oils and reduce their performance benefits. AMSOIL does not support extended drain intervals where oils have been mixed.

Aftermarket oil additives are not recommended for use with AMSOIL OE Synthetic Engine Oil.

TECHNICAL SERVICES
For immediate answers to your technical questions call (715) 399-TECH (8324) between 8 a.m. and 5 p.m. Central time or email tech@amsoil.com.

SERVICE LIFE
In petrol-fueled vehicles, AMSOIL OE Synthetic Engine Oil is recommended for the intervals stated by the vehicle manufacturer or indicated by the oil life monitoring system. Change oil filter at every oil change.